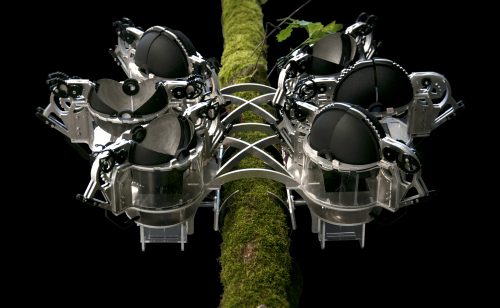 The solution for the yearly problem of the oak processionary (Dutch: eikenprocessierups): robots. On a real branch of an oak tree, including leaves, Jip van Leeuwenstein planted a machine that with a system of six lockable cylinders to end the life of the caterpillars. The metal device clearly states: “Stop here.” We recognise the dangers of a disturbed balance in nature through the introduction of a predator which has to solve a problem. Like the giant toad that became a plague in Australia after its launch as a sugar cane beetle. “Designing new robot predators has the advantage of not losing control”.

Jip van Leeuwenstein graduated this year at HKU Utrecht and is part of our Young Talent program.

The project: ‘A Diverse Monoculture’ questions the future relation between mankind and nature. Is it possible to deploy robots to find a new balance within our eco-system? ‘A Diverse Monoculture’ is a deployment of several robots which together form a hive of new predators. These predators are used to attempt to restore the balance within our eco-system.

Humanity always had a contradictory and ambiguous relationship with nature. On the one hand, nature is ought to be protected and preserved in national parks and reserves.  On the other hand, pollution and destruction threatens the environment and no responsibilities is taken once however. Profits and gains seem to be more important than moral obligations.

Within this project, I try to provide a different point of view on nature. I try to dissolve the border between culture and nature and question the current definition of nature.

We all feel the urge to control everything all the time. This urge introduces new problems and challenges to our current society.

The cultivation of crops and increasing demand of food facilitated us to justify the continuing manipulation of our environment. The whole system is profit oriented and optimized to generate these profits disregarding the balance in the eco-system. Examples can be found in the use of pesticides or genetic modification to maintain a monoculture of crops.

Nature is a common good, however we seem to be claiming it for ourselves as a way of expanding our capital. The question arises to what extend humanity can satisfy its urge to control everything.

Introducing a new predator into the eco-system has been tried several times in history, most of the time with catastrophic consequences. For example, in Australia, where the giant neotropical toad was introduced to eradicate the cane beetle. Afterwards, this solution became the problem since the population of toads increased rapidly and became a plague themselves.

Furthermore, the robot will operate and actively participate in the nutrient cycle by using Micro Fuel Cells. The reaction within these cells will chemically transform the insects into electricity. The electricity will be used to power the robot and keep the predator alive.

The ‘Dionaea Mechanica Muscipula’ is developed to reduce the population of oak processionary. The moths of the oak processionary are active at night and attracted to light. The robot will lure in nearby moths by light up its mouth.  The mouth acts a trap which contains the curious moths. Some moths purposely remain in the mouth since they spread pheromones that attract other moths. This will increase the speed of the process. The other moths are processed toward the stomach of the robot where the chemical reaction of the Micro Fuel Cells will power the robot.